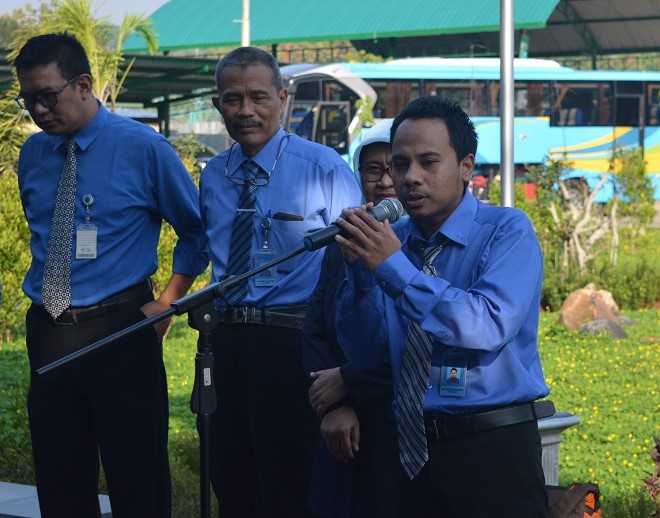 UNIMUS | Semarang (24/07/2017) Located in the front yard of Universitas Muhammadiyah Semarang (Unimus) main building, the Vice Rector 1 (Dr. Sri Darmawati., M.Si), representing the rector, dispatched 36 students who’ll take part in a Student Community Service-Community Empowerment (Kuliah Kerja Nyata Pembelajaran Pemberdayaan Masyarakat/KKN-PPM). Led, by Moh. Yamin Darsyah, M.Si., the program will be held in Wado Village, Kedungtuban Subdistrict, Blora Regency. The program is held following a grant from the Ministry of Research, Technology, and Higher Education, which has been successfully achieved by the team. Moh. Yamin Darsyah, M.Si, a lecturer in the Statistics Study Program at Unimus, stated in the departure ceremony that with the theme “Utilization of Foodstuffs to Improve the Community’s Prosperity”, the program will be held for 2 months, where the first month will be for debriefing and the second month will be for the program implementation. Those participating in the KKN-PPM program include students from Food Technology, Statistics, Mathematics Education, Chemical Education, Electric Engineering, and Mechanical Engineering Programs.

In the ceremony held along with the routine Sunday morning prayer, the Vice Rector for Student Affairs (VR III), Deans, Heads of Bureaus and Technical Units, Lecturers, and Educational Staffs at Unimus also attended  to officially dispatch the students. The Vice Rector I in her speech congratulated the team on the achievement. “I hope that the program will be successful and also I advice you all of my students to always be active giving solutions to the people’s problems, obey the local rules and norms, and be able to optimize people’s potentials,” she said. Meanwhile, DR. Dini Cahyandari, M.T., the head of the Institute of Research and Community Service (Lembaga Penelitian dan Pengabdian Masyarakat-LPPM) at Unimus also told the students participating in the program to succeed it, so that their actions and participations in the society could be felt the benefits.

On that occasion, the KKN-PPM program leader revealed that the program was an obligatory intra-curricular combining the Three Obligation with the method of giving learning and working experiences to the students, in form of the people empowerment program. “This community service will be also a medium to apply and develop science and technology, held outside the campus in a certain period of time, working mechanism, and terms. Furthermore, the program is designed to give a guarantee of connection between academic-theoretic and empiric-practical spheres. Thus, synergistic interactions between students and society, by loving, helping and causing harmony between each other, can happen” he added.

Students of the Faculty of Dentistry at Unimus Joins the International Student Mobility Program at the University of Malaya, Malaysia.
Comments are closed.